Non-spoiler tl;dr: I quite enjoyed it as the kind of thing I want with "Star Wars" in the title, with the caveat that it is by no means a standalone story and I have Opinions about how things should play out. I think if you have a general ambient-cultural-background knowledge of the original trilogy you'll be good (I haven't rewatched those in ages). And we're not taking SteelyKid because (a) she wouldn't do well with the reasons it's PG-13 and (b) she doesn't have even the general background knowledge, really, and thus would be completely lost. Star Wars is not the fandom of my heart (I was born in 1977, so timing works against me, there), but I'll watch the next one and maybe go rewatch this if I have time over the break.

Quick spoiler comments behind the cut; I haven't read anyone else's reactions (though I did accidentally spoil myself for one thing, which was too bad) because I have a million things to do tonight, but if you're not on my DW reading list (or my G+ circles), drop a link and I'll take a look.

I'd seen pictures pointing out how much Rey looked like Anakin's mom and young Leia, so I was primed to learn that she was Leia and Han's daughter. Hah, fell for that one. I recognize it's still possible that she's Luke's daughter, but I really don't want that to happen, because (a) I'm tired of the Skywalkers being ~~special~~, (b) if everyone else knew then they really sucked for not telling her (or looking for her!), and (c) if no-one else knew that seems to stretch credulity, especially Ren not guessing from the feel of her mind or whatever.

(The dramatic odds are drastically against me, I admit that. I just have to sulk over it for a year or so and will eventually be resigned.)

I also really wanted Finn to be a Jedi--teasing me with trailer shots of him wielding a lightsaber!--and I will be bummed if he isn't. Yes, he didn't show any particular Force sensitivity, but that doesn't mean he can't be taught, and can't they both be?

I enjoyed them both very much, from her "why the hell do you keep grabbing my hand?" to his enthusiasm (no playing-it-cool jaded type here!) and their overall competence and camaraderie. (It'll be interesting to see which way fandom's going to jump--were Finn not played by John Boyega, he would naturally be shippable with Rey or Poe, but fandom tends to be less enthusiastic about putting black dudes in its fandom-eating pairings. Prove me wrong, fandom!)

And yeah, I didn't look away from my phone at the right moment and was spoiled about Han's death. I'm fairly sure if I hadn't been, I still would've seen it coming, but it was too bad, because it messed with the experience of the scene.

(I have no particular feelings about Ren at the moment, except for "huh, he does kind of look plausible as Harrison Ford's kid," just because I'll eat my hat if he doesn't get redeemed at the end of the trilogy, so it doesn't seem very engaging an arc. We'll see.)

As far as the older generation--they were game, and it was good to see them, but it was pretty painful watching Harrison Ford attempt action heroing. And if the immobility of Carrie Fisher's lower face was from plastic surgery, then I spit on cultural norms that demand such things of women and not men.

Thanks to Twitter, I had Hamilton in my head the whole time I was waiting for Leia to appear: 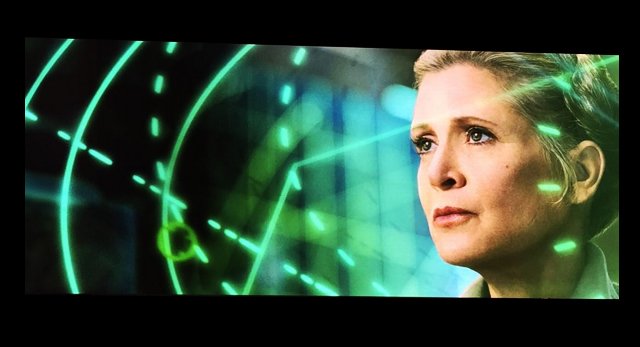 (It was totally hilarious that the first line of the opening text was "Luke Skywalker is missing," after all the pre-release speculation caused by the trailers and posters. Thank goodness we aren't chasing that map over the next two movies, though, I briefly feared we were going to be Questing.)

I have no idea what was going on with the politics--there's a Republic, and the First Order is fighting it, but there's still a Resistance? I look forward to finding people discussing, like, the new novels that presumably explain this shit, and the CGI big bad, and if we were supposed to recognize the guy that Poe met at the beginning.

I'd say Gwendolyn Christie was a waste as Captain Phasma, since presumably she went up with the planet in a garbage compactor, but she was a female voice in a bad-ass Stormtrooper outfit, so that's not nothing. Also, at least one female Resistance pilot, and while Lupita Nyong'o has such an amazing face I would also have liked it see it, her voice acting was lovely.

Oh, and yeah, there was a big round weapon that had to be blown up, and that killed a fuckload of people with very little emotional weight. That happened. (I recognize they tried to make it different, but it was kinda "this, again?" I'm hoping it's now off the table.)

Edit: oh yeah, the random faux-Japanese gang (I can't remember their name, but it was definitely something Japanese, and they were all human and Asian-ancestry-appearing) was uncool.